The name Guillermo del Toro is synonymous for horror stories and unbound fantasy, mythological roots and various kinds of monsters. All of the above was reflected in his Hellboy comic book adaptation. Czech locations and actors were big help.

Imagine you are a man who only wants the following in his life - to be ordinary, lie down on the couch after coming home from work, open a beer can, light a cigar and turn on the TV. Instead, you were born out of hell, you possess superpowers and were addressed by the government to fight evil. To make things even worse, you have a girlfriend who makes you red-hot on a regular basis. Well, this is Hellboy. Even though the last fact may not be entirely true, he's been red-hot since his birth. He's left with nothing else but to fight bad guys and comment on everything with his typical dry lines. Hellboy in the direction of del Toro is simply a character with attitude, a hero against his own will, radiating his unmistakable charm.

The visual side of the film is marked with substantial Czech contribution. The main bad guy Rasputin is portrayed by film and theatre actor Karel Roden, and his Nazi colleague, the mystical Kroenen, by actor and choreographer Ladislav Beran. In the stunt scenes, Hellboy in the film, Ron Pearlman, was substituted by Jan Petřina. Even most of the vehicles shown in the film were of Czech origin - the FBI agent Myers drives a Čezeta, a motor scooter, Hellboy's bed was made of the rear part of a pick-up car, and the Russian truck was a Tatra.

Understandably, the most recognizable Czech features are from the filming locations. The most striking one is Hellboy's residence, the National Monument in Vítkov in real life. The surroundings were later made of shots from the Prague quarter called Stodůlky. Even the replica of the NYC subway train was made in Prague, decorated with its typical patina, created by a few Czech graffiti artists. Long story short, Hellboy wouldn't be what it is if it weren't for Prague. Make a trip to Holešovice, Smíchov or the Strahov Monastery, and recall yourself of the comic alternative of the Czech capital city.

Locations of the film Hellboy 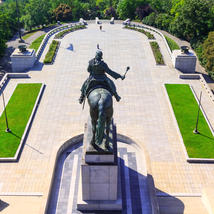