„No one will suffer. Mr. Kopfrkingl will see to that.“

You have a day off and it's raining cats and dogs outside. That's just your luck. Ideal time to spend the afternoon in bed with a good book. Not your cup of tea? Good. Luckily, there are places just perfect for dull weather. Come on, don't be afraid. Mr. Kopfrkingl will take you on the trail of the Cremator. The temple of death is open.

The peaceful and majestic crematorium in Pardubice, the interiors and exteriors of which were used in the film The Cremator, perfectly create the chilling and fanciful atmosphere. No need for a guide here; instead, take the novel written by Ladislav Fuks, on which the film is based on, and feel free to enter. Listen close. You will hear footsteps of the dead echoing in the corridors. You hear whispers. What could it be? "We grow closer because of death; there are no differences between human ashes." That's what Mr Kopfrkingl said as he was putting his son Mili into the coffin next to the dead SS officer.

Cremation, ashes, death - the order of the day for the decent and devoted employee of a Prague crematorium. They were both his mission and curse. Go on, follow in his steps, they will take you where he used to go every day, where he even took his daughter Zina. The gloomy atmosphere thickens, as if the temperature dropped. However, you can't help it, you just have keep on moving. There's something hypnotic about death. But beware, it could swallow you whole, like the Nazi ideology did in Mr Kopfrkingl's case. Another sound reaches you ear: "Death is the only certainty in life." Don't worry, it's just Mr Kopfrkingl mumbling his favourite lines. It will make your flesh creep.

The space seems to grow more and more narrow. It's only an optical illusion, yet still it provokes slight dizziness. Better go out and catch a breath of fresh air, so it doesn't all make you go insane. The line between reality and fiction is very thin. A short walk around the cemetery is good for everybody. As you pass the graves of soldiers fallen in world wars, remember the beautiful Lakmé, who was of Jewish origin. Remember the fate of people who share the same creed, all who became victims of those wanting to collaborate with Mr Kopfrkingl. But enough for today, get yourself a treat for all the horrors you've just experienced. Why not visit a candy shop and taste a bit of the Czech black humour - would you like a coffin-shaped éclair or a dark chocolate cake?

Locations of the film The Cremator 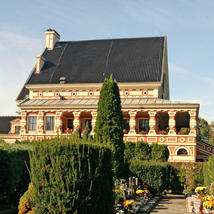 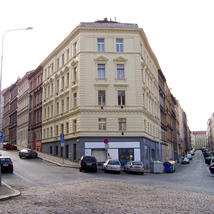 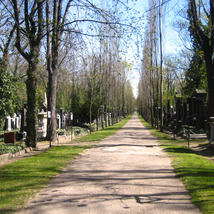 The Burning Bush, The Cremator