„Hear the story of the third prince, great love and mysterious curse of the Diamond Rocks...“

A fairy tale in which everything is doubled - the swords, the dogs, the horses. But above all, you'll be overwhelmed by the shots of the bizarre rocks, in which the mad organ player plays his tunes. Get acquainted to the Third Prince, a fairy tale causing nightmares to generations of children.

Set out for the journey with the princes to the kingdom in the rocks. Beware, however, of the princess who lives there - she has a sister, one indistinguishable from the other. And because this is a fairy tale, they won't give themselves to just anybody, first you need to complete three given tasks.

We're in the story of Czech writer Karel Jaromír Erben, in which the princes travel to the enigmatic Diamond Rocks. They're in search of a mysterious princess, whose looks they only know from a painting. Each of them has his own magic sword since the day he was born; their swords are a bond of their lives.

Walk into the rocks, where others went in search of the diamonds. While you sift sand in between your fingers, hoping to find a precious gem, look around, maybe a lost sheep will show you the way to the diamond road. Don't get too blinded by them, though, you wouldn't find your way back. The diamond road is a blind alley. It's easy to get lost in the rock maze, and even easier to disappear for good. The only thing left of you would be the sound of your heart beat in the rock. And your brother's sword.

You won't find the Diamond Rocks in the Czech Republic, but if you visit Adršpach Rocks, you'll notice a resemblance. You'll also understand why the filmmakers chose this location for the shooting. Watching it in a film is nice, but nothing beats a personal visit. If you meet a princess and she asks you why you've come - when you're not buying, not selling anything - you can reply that you simply came to admire the beauty.

Locations of the film The Third Prince 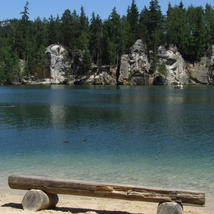 Princ a Večernice, The Third Prince 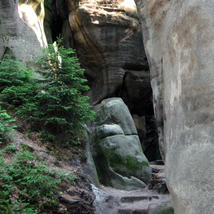 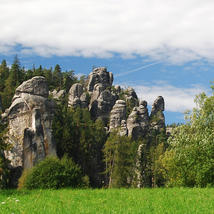 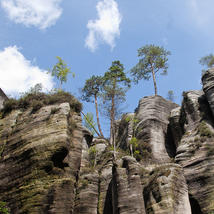