„Where the devil can't go, he'll send a woman.“

The time when access to the Karlštejn Castle was forbidden for women is fortunately history. King Charles IV was not against emancipation, so everyone is free to experience what residing on a castle feels like. So put on your headphones, play the film soundtrack and head out to Karlštejn!

Did you know the filming of A Night at Karlštejn took place during opening hours of the castle, and there were visitors who made a brief appearance at the filming spot? A few of them even made it into a camera shot! Today, we can't be part of this particular film making anymore, but there's no need for sadness, the castle walls still bear significant impression of its rich history. The royal chambers charm you with noble and dignified atmosphere, the settlement of the castle offers more of a joyous mood. It's exactly like the film shows it.

What's so impressive about kings and queens that makes us visit castles in our free time? Is it curiosity, the desire to learn what it was all like back then? Perhaps a wish to connect with them and get to know them better? The truth is that we most likely want to realize that even the royals were and are mere people, just like the rest of us. This is one of the reasons why A Night at Karlštejn is so charming; even one of the most known Czech rulers was burdened with doubts, weaknesses and faults on one side, and the ability to love, understand and forgive on the other. He was human, with blood running through his veins, he wasn't a statue on a pedestal. Just add a bit of kind humour and a pinch of catchy tunes, season with a happy ending, and a golden Czech film classic is born!

Who cares if the reality was slightly different. Charles IV was originally named Wenceslas, women were allowed on Karlštejn (certain parts of it, for that matter) and the castle had no lightning conductor back then. None of this matters, though, the magic of films like this lies in the fact that reality may be turned and embellished. These films show us the world we want to see. So don't waste another minute and go to Karlštejn for some of your private daydreaming.

Locations of the film A Night at Karlštejn 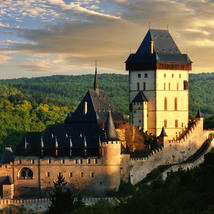